K1m j0ng-uN is trending so hard right now. He is the Best New Man in global politics. He is hyper-relevant. He is ahead of the trend, but so in and of the trend, it’s hard to even know how he relates to the trend.

But why? Is it his cutting edge ‘do? Is it the success of revisionist masterpiece “Onwards Towards the Final Victory”? (http://www.youtube.com/watch?v=DfDCtAlBw2I) Described by P(itchfo)RK as one of the most relevant pieces of recent times, it now has over 17,000 HITS on YouTube: the perfect mix of under-the-radar-relevance and relevant recognition from the so-called “big-time blog players”. I personally feel that Kim has achieved his relevance through a savvy blend of media manipulation and relevant censorship. 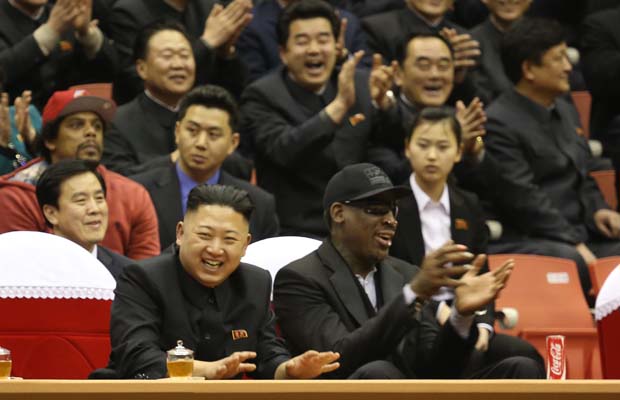 Kim and Rodman vibing at the game.  Is that a beer Kim?? (Does Kim drink red-stripe?)

Anyway, after Kim decided he wanted to chill with Denny Rodman (a wack-ass baller who dabbled in wrestling and slung it up Madonna and slam-dunked Carmen Electra) we thought we’d see if he wanted to chill with us to achieve more cross-over success. Think of it like Lou Reed teaming up with Metallica, then deciding he wants to collab with Clams Casino too. It’s a natural progression to maintain relevancy. Old Kim fans will be like, “yeah, I can see how this is relevant” and new Kim fans will be all like “yeah this is relevant, I suppose”. Whilst Kindjacket fans will be like, “this could help the blog achieve crucial likes and relevance whilst massaging the egos of the guys at the blog so it’s pretty much win-win.”

Due to travel and visa difficulties I was only able to Skype Kim but when I finally got through he was looking chill, wearing a black Yankees snapback (post-relevant), Denim jacket (spring ’13 relevance) and a pale blue Yeasayer t-shirt (post-Pseudo-Psychedelia-relevance).

Kindjacket: Yo Kim! What’s up bro? How’s it going?

Kim shows me (insert relevant meme). We both laugh heartily. BOOM!! I’m really warming to this guy. He’s got a keen eye for a relevant meme and he’s chill with sharing it in an environment where he knows he’s not going to get a like. That’s cool with me, I can respect that.

Kindjacket: So Kim, what you been listening to, man?

Kim: Well censorship is a pretty big deal out here in the PRK but I’ve been sussing on Onwards Towards the Final Victory lately, it’s played pretty heavily on the radio and TV since I got elected, so mostly that. Those youtube vids with the kids playing guitar are pretty chill too, and it makes me pleased to see their happy faces, they love music and you can just tell those kids love “real” music. (http://www.youtube.com/watch?v=njG_dQC-cnk ;  http://www.youtube.com/watch?v=gSedE5sU3uc). Oh and of course, when I think about my late, great Father I like to slide No Motherland Without You on…I think that tune summed him up so perfectly. (https://www.youtube.com/watch?v=6LT8rVM0Mr0)

The mention of his late Father has clearly upset Kim and I give him time to compose himself. He sobs passionately, before an aide comes to his side with some tissues…He blows, I continue, grateful of the fact that I don’t dwell on the relevance of North Korean children playing guitar sounding like every other shit Mumford and Sons cover you hear at open mic gigs and No Motherland Without You sounding a bit like Bastille (I’ve never listened to Bastille, they don’t even have a Pitchfork page so I’ve definitely never listened to them but I imagine they sound like that). 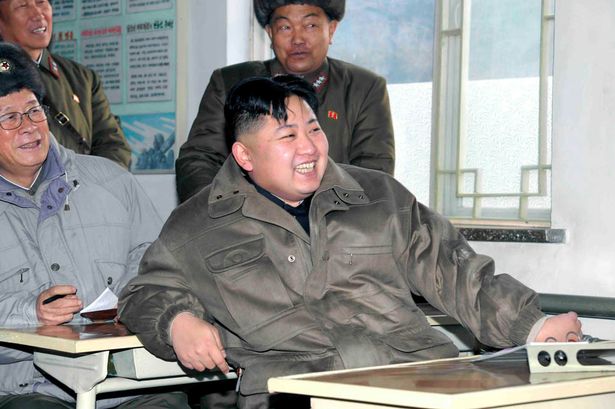 Kim being chill w/unchill bros. Cool jacket Kim, did you get it from the oxfam tent at Reading Fest??

Kim: It’s okay actually. One of the good things about Korean politics is that I can do pretty much whatever I want and there are no bullshit quangos or review committees to analyse the decisions I make so it’s actually way more chill than you’d imagine and there’s no red tape to slow the bureaucracy down. Plus, you seen Team America bro? The sharks I have are the dopest thing. Me and the boys love smoking up and watching them swimming about.

The irony is, you’d vote for this man in a heartbeat {via the knife’s much hyped comeback}, and yet he doesn’t even need your vote! I try to press him on some of the weightier domestic issues the country faces because things are going so well…

Kindjacket: Any plans to change an economy and political system which is seriously failing your starving people?

Like many in today’s society I attempt to inject some greater depth and insight into a conversation, but fail and instead talk about some relevant relevancy as an easy get out clause.

Kindjacket: How are you finding your new relevancy then, bro?

Kim: Yeah, pretty chill, dude. I remember the little milestones in my life: 100+ likes on a profile picture, facebook page hitting 2,000+ likes, first fake twitter account, first twitter death…I could go on, but obviously the big one is trending on twitter, I can’t forget that! I guess it feels pretty good in the moment, but you can’t forget that it’s just social media and there are more important things than people just giving you a bit of recognition when they’re killing time on the web, in between jerking of over the naughty gif section of ffffound. I’d trade in all my online relevance for the opportunity to work it with my childhood sweetheart again, but she left the country after I ordered my Chief Military Official to persecute her family and friends when she said we should go on a break. Too bad, I guess…

Kindjacket: So what are your plans for the future then? Don’t look back into the sun (via Libertine-relevance-in-a-previous decade) Kim!

Kim: Well, I guess I just wanna build a global empire and do my father proud (via The Inception). If that means that I achieve some relevance along the way then that would be pretty cool.

Kindjacket: Cool, thanks bro. Good to catch up with you.

Kim’s an emotional guy and I really feel his pain. I think it’s easy to misunderstand him, he probably has a little insecurity about his weight (he’s 3-4 stones too heavy), he clearly pines for his childhood sweetheart and he just wants to make his recently deceased dad proud. Achieving online relevancy has been good for him and he knows it but deep down maybe he- and all of us, in fact- want something more concrete which mad likes, shares and retweets won’t give us. We don’t want relevance, we want something relevant in relevant moments in the future which won’t fade out of fashion in the predictable cycle: weird, alt-relevance, blog-relevance, high-street (lamestream) relevance, counter-relevance, post-relevance. Kim knows this. That’s why he wants to establish a global empire. If establishing a global empire means pissing off Barry Obama (the first black president) then so be it. I for one wish him good luck and continuing good look because he really is the most relevant global politician right now and probably one of PRK’s most relevant hipsters/working professionals.

Do you think I should have asked Kim about Psy’s breakthrough relevance?

Do you wish Kim good luck in achieving what his father wanted him to achieve via his last wish?

Do you think Kim is misunderstand/relevant/irrelevant?

Do you sympathise with Kim Jong-un’s political ideology or just the fact that he is a 29/30 year old bro trying to make his way in this world where relevancy has never been more fleeting?

This entry was posted in Interviews, Thinkpiece and tagged north korea. Bookmark the permalink.