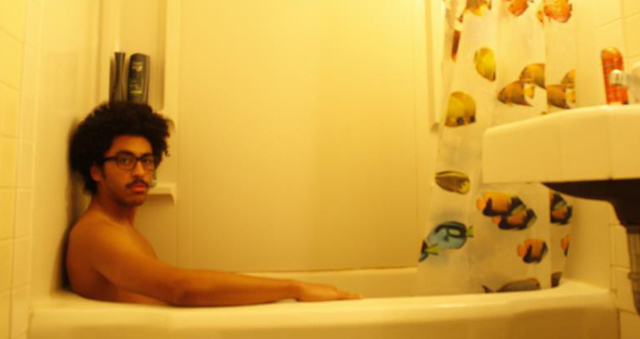 Late last year Rory Ferreira known as Milo dropped his brilliant debut mixtape, “I wish my brother Rob was here” it was witty, poignant and a breath of fresh air in both the Rap and Nerd Rap game.  It even came 15th in our top 43 albums of 2011.  Eagerly anticipating the release of his next mixtape “Milo Takes Baths” (released next week on the 19th), we thought it would be worth interviewing the man; below is our conversation.

Kindjacket: Hey Milo, how’s it going? What have you been up to today?

Milo: Today is Friday. At my house we call that “Fried Rice Friday” so my roommate Greg and I bought a whole mess of veggies and tofu and will be making fried rice and finishing off watching the remainder of the 1st season of Game of Thrones. Absolutely great television right there.

We’ve read that you’re majoring in Philosophy at college in Wisconsin? Is this true? Or simply part of a devious plan to convince us you’re the world’s smartest rapper?

I’m definitely not the world’s smartest rapper. I don’t want to be the -est anything. But you’re correct, I’m studying old dead white man writings in Northern Wisconsin because I didn’t have the courage to full-on pursue my dreams. Now I spend my days trying to figure out what “courage” is and convince myself there’s a chance I might still have some.

Who do you think the smartest rapper in the world is?

The smartest rapper in the world is the one who quits before he starts. “Smartest rapper” is oxymoronical. We’re all peons.

And what are you listening to at the moment?

Talking Heads and Shut-Ins instrumentals. I’ve been taking piano lessons so a lot of weird old jazz bits and bobs. Hip hop wise? I listen to A$AP Rocky’s “Wassup” an embarrassing amount, something about that video sort of enchants me. Outside of that strange affliction, Busdriver’s “Fear of a Black Tangent” has been resonating a lot with me lately.

It seems that what you rap about on a lot of the songs on “I wish my brother Rob was here” is really personal and also really believable. Do you find it hard having your feelings being so exposed to other people?

Not really. Because there’s a beauty in letting those feelings loose onto you. Please, take them from me, I would prefer not to have their burden any longer.

What sort of sounds can we look forward to hearing on “Milo takes Baths”? Will the album be similar lyrically too?

Baths is fairly unparalleled. He’s like the Khal Drago of this beat-oriented music. When I listen to his music it reverberates inside of me like yelling into a cavernous canister of Swiss-Miss. I wrote these songs over the course of one week. The tape was going to originally be 10 tracks but hip hop politics and aspirations sort of intimidated me into 7.

Lyrically, I feel I’ve developed quite a bit and I’m getting more comfortable. Experimenting more, having more fun. Recording and writing is really my favorite part of doing music and on this tape I felt really at home on Baths instrumentals– so I think you’ll be able to hear that quite a bit.

What do you think the future holds for Milo Rapsmith? What sort of appreciation do you want most for your music?

I don’t think about the future because when you’re an anxious person your psychiatrist lectures you ad nauseam about living in the moment. But uh, I’ll play along. I’d like to be able to afford food and a small apartment solely off rap. Then segue into writing plays and short stories and novels. That’s really my only talent, writing, and rap lends itself very well as a great place to begin with that. But I’d, eventually, like to move on.

Appreciation for my music? I’m blessed to have gotten so much already! The nerdy cats who message me to let them know they’ve felt lonely for ions until they heard my tape. That’s the best feeling. Because I’m lonely too, and I’m trying to honor Kurt Vonnegut’s wishes, you know? When he said, “But the most daring thing is to create stable communities in which the terrible disease of loneliness can be cured.” It feels like we’re making good footwork on accomplishing that.

What’s been your favourite moment so far as an MC?

Both my parents believe in my dream now. That will be my favorite moment as a human being, a son, and an MC for a very long time.

Well– you know that pineapples are seen as this symbol of hospitality, yes? And in this day and age, people don’t really buy music any more and “support” is expressed through clicks, so when you cats like http://facebook.com/modestmilo in my mind, you’re offering me a pineapple of hospitality. Helping a bruv feel welcome. I appreciate it.

Thanks so much for this interview. As Neil Young said, “keep on rockin’ in the free world.”

You can download and stream Milo’s first mixtape here.  “Milo Takes Baths” is out on the 19th, stay posted by liking him on facebook.

This entry was posted in Interviews and tagged interview, milo, rap. Bookmark the permalink.