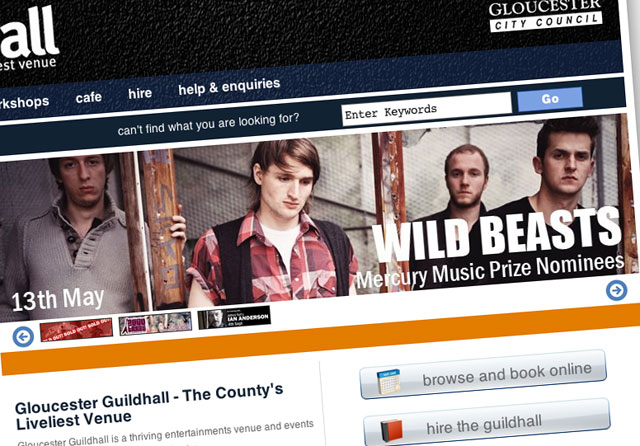 Wild? Not really. Beasts? I couldn’t say. Are they any good?

It was certainly an eclectic mix that greeted the Wild Beasts to their first sell-out gig in the guildhall Gloucester. This venue offers any up and coming acts, or seasoned pros an opportunity to shine, with its comfortably-sized room with half decent acoustics, plus the best sprung floor I’ve ever experienced. They’ve even got a bar at the back of the main hall, as well as more relaxed café bar next door, and what’s even more civilised – they that let you drink from a bottle in the main hall. Let’s hope it survives the council’s cuts!

I must admit I wasn’t over familiar with the Beasts output, apart from a few spotify plays. So I had no idea what to expect, and when they did finally start, I thought I’d been transported to a Hawkwind gig, as opening cords (noise) had a remarkable resemblance to 70’s classic silver machine, did Lemy burst onto the stage warts and all? Fortunately not, who did appear was a lead singer Hayden Thorpe who resembled 80’s new romantic, swept back hair and his high hitched guitar, and three lads and girl who looks like the support acts roadies. The first thing that struck me with opening track Albatross was the quality of the drummer; his stick work and timing was just tremendous! The rest of the band where also very tight too, and the often forgotten sound guys on the desk had got the sound well sorted too – a good start.

Their music reminds me of a mash-up of so many new wave/indie influences, the lead singer sounds very similar to Billy Mackenzie of The Associates, perhaps not quite as high, and lead guitarists Tom Fleming voice, passes a remarkable resembles to Prefab Sprouts Paddy McAloon. Once mixed together with that cracking drumming Bert, the sound had a expansive sound of Edwyn Collins Orange Juice on steroids! Which can’t be a bad thing!

There wasn’t much in the way of on stage banter (perhaps that’s not that cool anymore) apart from observations of the size of seagulls locally, and the set did seem a little short (or was time going quickly) either way the three track encore did not disappoint the appreciative audience. The closing track was yet another 70’s pilgrimage, as two front men faced off, keyboard to keyboard in a self-indulgent prog rock style to end the evening, unfortunately Rick Wakeman’s guest appearance was cancelled last minute, due to his coiffures retirement.

Any good? Yep, go and see them at the big chill!